Does anyone know any books that compare Roman Catholic doctrine and Lutheran doctrine? I’m a Missouri Synod Lutheran engaged to a Roman Catholic. We have a very healthy relationship and often discuss our beliefs with each other. We are both very interested in learning more about how Lutherans and Roman Catholics relate to each other, and differ from each other.

It would be great to find books that provide a good neutral standpoint. Or perhaps a book that has a dialogue between Roman Catholics and Lutherans. (I should not I am not interested at all in ELCA Lutheran theology. ELCA is completely different than Missouri Synod).

Recently I found a couple books written by a Roman Catholic that talks about Martin Luther: 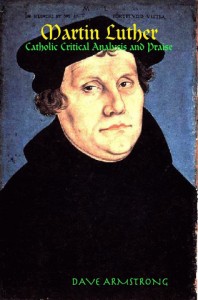 This part of the book description caught my attention:

I aim to present Luther as he was: no more, no less: as fairly as I can, but ?warts and all,? too. I do not regard Luther (like many Catholic biographers and critics throughout history) as an essentially ?evil? or ?bad? man. I don?t deny his good intentions and sincerity at all.

Part Two: the ?praise? section of this book, runs 83 pages, or about 34% of all the material from Chapter One to the Bibliography. 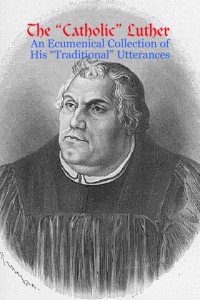 The ?Catholic? Luther : An Ecumenical Collection of His ?Traditional? Utterances by Dave Armstrong

This part of the description was intriguing:

I shall be citing the portions of Luther’s writings that Catholics would agree with. The ecumenical endeavor is devoted to finding things that Christians have in common. This book will do exactly that. If I can persuade a few people that Catholics and Lutherans have more in common than either side (for the most part) imagined, I’ll be more than happy and fulfilled, having accomplished my goal.

Since I’ll be reading two books by the same author, Dave Armstrong, I’m curious what LCMS Lutherans have to say about him. Using my Lutheran blog search engine, I found three blog posts:

I still have to read these three articles. If anyone has any Lutheran-Catholic books, please let me know in the comments. And if you know anything about Dave Armstrong, I’d like to hear about him as well. Thank you.

This site uses Akismet to reduce spam. Learn how your comment data is processed.

Get email updates when new blog posts are made.